I’ve been quite fortunate. As a (relatively) new author, I’ve found tremendous support and a wealth of opportunities through my network of colleagues near and far, and I’ve been lucky enough to meet a few of my favorite authors over the past 5 years of my writing career. Thanks to author, critique partner, and dear friend Sophia Jones, Diana Gabaldon is now on that list.

I highly recommend attending conferences and author/reader events, large or small, to aspiring authors. After all, Killer Nashville not only expanded my network, it provided the means of landing my wonderful agents. Aside from those benefits, conferences serve as a balance to the often solitary business of writing. Arizona Dreamin’ did just that – with workshops on craft, editing, marketing and promo, as well as two REALLY useful how-to sessions on avoiding procrastination and successfully executing writing sprints, the conference was both informative and flat-out fun!

And, of course, I had a blast being a fangirl! I fell in love with Diana Gabaldon’s epic Outlander series, and James Alexander Malcolm MacKenzie Fraser, after marathoning my way through the first seven books. No easy feat, as the books are freakin’ HUGE. So I was over the moon excited at the prospect of meeting the woman who birthed some of the most compelling and memorable characters I’ve encountered. 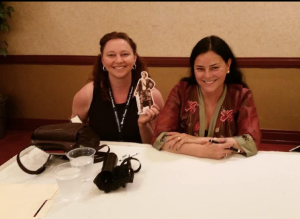 She proved to be as witty, engaging, and entertaining as her characters, and gracious with her advice to writers in the audience. I was inspired and heartened to learn that she, too, began her writing career in the midst of juggling her primary career as an academic researcher with the demands of motherhood – this resonated with my own journey and gave me hope that I *may* not be quite so insane as I’d first been told when I started writing (while juggling an academic research career, two small children, and a husband who spends half of the month traveling). Or, if I am a bit insane, at least I’m in good company.

She was quite amused and (I think) pleased with my Pocket Jamie, and was gracious enough to pose for a photo after signing my copy of The Outlandish Companion Vol 1.

She shared details about the upcoming television adaptation, including her nickname for Sam Heughan (‘Sheugs’), and told us she’s been quite pleased with the footage she’s viewed so far. With that seal of approval, I’m even more excited for the August 9th premiere. She also promised more Lord John books – much to my delight when I asked the question – and mentioned plans for a series involving Master Raymond, prehistoric time traveler and Claire’s ancestor. This confirms the information under FAQ: About the Characters on her website, and based on the novella in which he and the Comte St. Germain appear once more, I wouldn’t be surprised at all.

And I’ll definitely read it!

Thanks to author and organizer, Morgan Kearns, and her team for this wonderful event, and to Sophia Jones for hosting me in her beautiful home city of Phoenix, Arizona (and for the day trip to Sedona). She also took me to The Tilted Kilt, which seemed quite appropriate given the occasion.

After a marathon session reading Written in My Own Heart’s Blood (after which my husband declared ‘Hooray! I can have my wife back now!’), I’m still in love with the series, characters, and look forward to the next installment. As usual, Diana Gabaldon leaves us with as many questions as answers (though the convergence of several plot lines was quite satisfying). No spoilers, but be prepared for some major heartbreaks, as well as more than a few moments of reckoning, and an ending that will tug at your heartstrings. Basically, all the things you know and love about the Outlander universe but better than ever!

All in all, it was a great conference, a great experience, and I hope to be back for more next year!