Since I did a wrapping-up-the-old-year-building-goals-for-the-new-year blog post around this time last year, I thought it would be fun to look at my goals from last year and see what kind of progress I made on them.

1. Finish and Edit Works in Progress

So at the beginning of 2013, I had wrapped up revisions on Waking the Dead and it was on its way to submission by my fabulous agent, Natalia Aponte. That left me with another novel (first in a paranormal romance series) that needed an extra 20K words added to bring it to a commercially viable length. I also had a stand alone contemporary romantic comedy novel half written, and the the second book in a series half written.

Well… not to shabby, as it turns out. The paranormal romance (working title Nixies in Dixie) got its extra 20K words, part of which contained a new subplot with a new character who will get his own book in the series. It placed second in MCRW’s 2013 PITCH Contest, and it is currently under submission by my other wonderful agent, Victoria Lea.

My rom com (working title Going Dutch) is finished and under submission as well. I’d like to thank my darling Dutch husband for the 13 years worth of material on which I built the banter in the story and for answering all of my annoying questions about Dutch-isms, aviation, and for the continued exploration of our fascinating cultural differences. I’ll give a shout out to my mother-in-law for reading it and correcting the Dutch language and usage parts.

Yes, you read that right. I sent my risqué novel to my mother-in-law to read. That’s one of the really cool things about the Dutch. They’re probably the least uptight people on the planet, and they have an incomparable sense of humor and the ability to laugh at almost anything, including themselves.

Alas, I didn’t quite finish up the second book in the paranormal romance series, but I did manage an extra 20K. Hey, it’s progress! I also went through three rounds of edits for my debut novella, Red Shoes for Lab Blues, and it was well worth it for the experience and the end product. Lyrical Press published it in May 2013 and as of the end of December, I met the personal sales goal I’d set for myself. I’m looking forward to selling more in 2014 as Lyrical joins forces with Kensington Publishing (see below).

2. Learn All I Can About Marketing and Promotions

Through contacts in my author networks and a few unexpected but VERY welcomed reviews (thanks, Booknatics!) , I was able to get hands-on experience promoting the novella through blog interviews, tours, and conferences. I was fortunate enough to win free admission to the 2013 Killer Nashville Conference through The Killer Nashville 2013 Investigator’s Sweepstakes. HUGE thanks to Logan Masterson for sponsoring the sweepstakes. Look for his debut, Ravencroft Springs, coming from Pro Se Productions 2014! I was lucky enough to catch a preview when we traded work for critiques, and let me tell you, this guy’s writing will give you chills.

I’m very pleased to have a second shot at marketing the novella, this time with the power of Kensington Publishing Corporation. Lyrical Press became an imprint of Kensington in 2014, and I look forward to a re-release and the opportunity to build a broader readership for Red Shoes and future work.

Probably one of the most rewarding parts of this journey has been encouraging other authors and watching them begin their own journeys. One of my cyberpals made her first sale at the end of the year. To my great delight, she told me that my encouragement was one of the factors that made her decide to write and submit original material. How cool is that? I get to be a mentor, too! And…one of my crit partners is working on her first novel. Look out, world – she’s got a great story in the making and I cannot WAIT to see what she does with it.

I am so pleased to report that my cyberpal, M.Q. Barber, published Playing the Game: Neighborly Affection Book 1 with Lyrical Press (follow the link to read my interview with her) and she’s gearing up for the next installments in the series. Like me, she’s waiting for re-release from Kensington, and I have no doubt she’ll find wild success! After all, she didn’t make the top reads of 2013 Lists at Red Hot Books AND Satin Sheets Romance for nothing!

My critique partner, friend, and all-around fabulous writer Sophia Jones published three great stories this year: The Phantom and the Psychic, The Pharaoh and the Curator, and Desert Dreams (follow the link to read my interview with her). She’s geared up to share more of Shaylene and Derek’s adventures with a follow-up, Desert Desires. She’s promised me (okay, all of her readers, but I know she’s really writing it for me) a pirate story and I’m cashing in on that promise in 2014 – you hear me, lady?

I’ve been able to give back through my MCRW chapter by serving as a Melody of Love Contest judge – this is one of my FAVORITE ways to give back. I got my start with contests, and the valuable and constructive feedback I received have made me a better writer. I hope I’ve been able to do the same as a first round judge. I’ve also had the opportunity to beta and crit for some of my MCRW sisters and I’m hoping to see their work on my Kindle and/or in my hands this year – I’m looking at you, Adventure Girl (and thanks for the feedback on Going Dutch)! Look for Jody Wallace’s Witch Interrupted in February 2014. I got to beta that one and I LOVED it even more than the first in the series, Pack and Coven (and I loved that one a lot)!

I’ll have the opportunity to give back to many of my fellow Aponte Literary authors. Look for Debbie Herbert, Ariel Swan, Brynn Chapman, M.V. Freeman, Tanisha Jones, D.T. Krippene, Eileen Charbonneau, and Juliene Osborne-McKnight on my blog soon. I’ve really enjoyed getting to know these authors and their work and look forward to sharing with my readers! 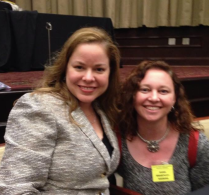 I’m counting 2013 as a success, and I think I’ll keep the same goals for 2014. Well, I’ll add a wish for more fangirl dream moments like the one I had meeting Jeaniene Frost at the Southern Magic Romance Readers Luncheon.

So that’s my year in review and my hopes and aspirations for the coming year.